(Please note: this update from the woods isn’t for the fainthearted)

While out visiting nest boxes this week we came across a taste of the wilder, more ferocious side of nature. Next to the path we found the remains of a bird on a flat concrete structure, which appears to have been used as a “plucking post”. After capturing their food, birds of prey, like Sparrowhawk (Spurvehøg) typically find a raised flat structure, to remove feathers and take apart their food so it can be eaten. 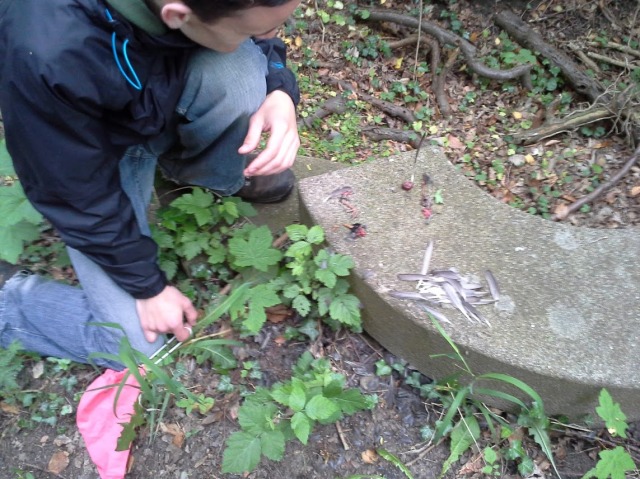 Getting a closer look at the plucking post in the woods at SDU. Photo: Jen Lynch

The first evidence we spotted were some narrow tube like structures, which resembled the intestine, and a round shaped reddish piece tissue, which I assumed to be the liver. On the ground there were a lot of feathers, which I began examining to attempt to determine the species. The majority of feathers were brown, showing wear at the tips, but some of the smaller body feathers were edged yellowish or green. At first I thought it might be a female blackbird, but I didn’t need to investigate too much as we soon found the unlucky birds head. It was a female Starling (Stær /Sturnus vulgaris). 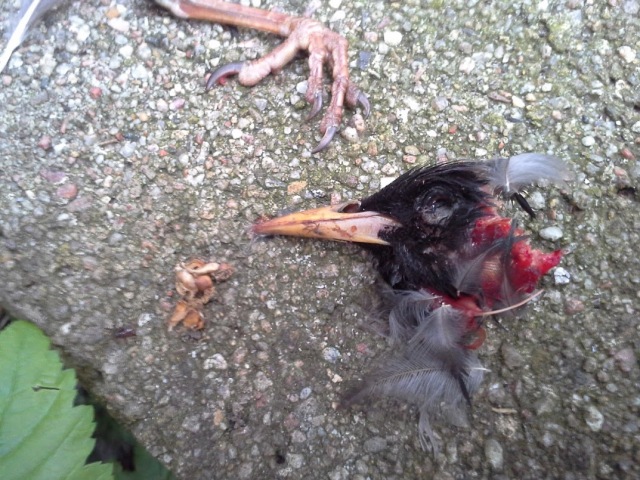 Remains of female starling at SDU. The base of the bill is pink in color in females. Photo: Jen Lynch

We looked closer at the other remains, which included a leg and the small round piece of tissue. I assumed it was the liver, but the others suggested it might be something else, less edible. We carefully dissected it and realized it was the stomach, filled with undigested green caterpillar larvae and beetles. To get an idea of what a Sparrowhawk looks like, and how it uses a plucking post – there is a good video here. The presence of a plucking post in the woods, may indicate a nearby breeding site, especially during the breeding season. To read more about plucking posts, check out this Wikipedia link.

A citizen science project set up to monitor breeding birds in nest boxes in the woods surrounding the University of Southern Denmark (Odense).
View all posts by sdubirds →
This entry was posted in Breeding Season, Denmark, Environmental Education, Nature, SDU, Wildlife and tagged Birds, forest, Nature, wild. Bookmark the permalink.