In a small enclosed area, surrounded by buildings on all sides, close to the Biology Department at the University of Southern Denmark there is a garden, known as the Mexican Garden. In the garden there is a small pond, partially filled with grass and reeds.

Earlier this year, at the end of May, a group of students and staff cleaned up this small green area and pond, and it appears that the local wildlife approve! A few weeks later, in mid June, some movement was noticed among the reeds and grass, close to the edge of the pond. After watching for a while a medium sized brown bird was spotted, hiding among the dried grass. A short while later a second duck appeared, and it was clear that a pair of Mallards (Gråand / Anas platyrhynchos) had moved in! It appears that Mallards will nest almost anywhere from hay stacks to roof gardens, enclosed courtyards and even in large flowerpots on balconies several floors up (RSPB). Mallards start nesting in March, so it appears this couple are a little late in starting their family.

Later that week, while enjoying a BBQ with the SDU Birds team in the garden, I noticed the female leave the nest. She made her way carefully through the grass and flew off over the surrounding buildings. I quickly removed my shoes and walked out into the pond to have a quick look in her nest. I was both surprised and delighted to spot 8 large baby blue eggs in a nest lined with feathers and grass. The normal clutch size is about 12 eggs, so there maybe more now. Although the nest is only two meters from the edge of the pond, it is excellently camouflaged and practically invisible. The female relies heavily on the male during the egg laying period, to protect her and their feeding areas (RSPB). After the eggs are laid, the role of the male is over, and he will leave the female and prepare to moult. 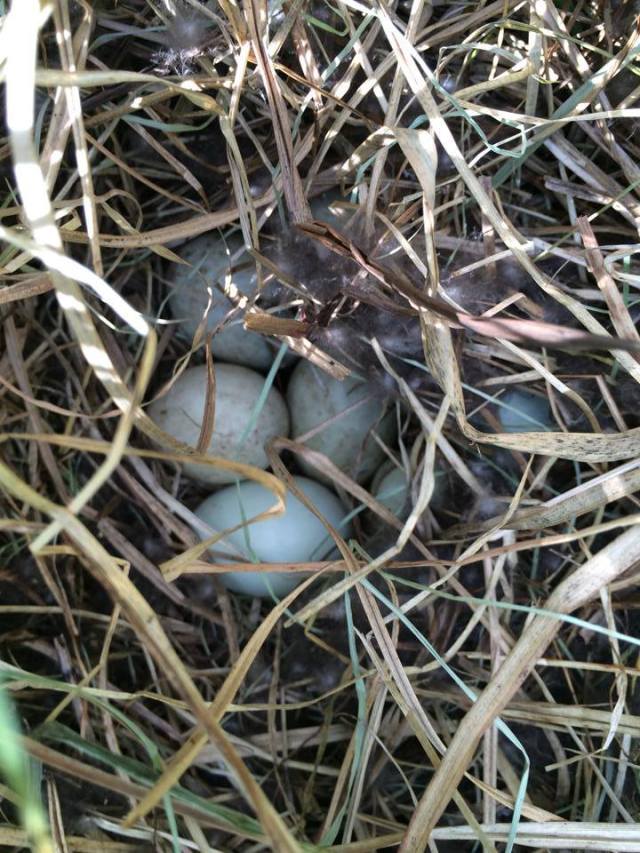 Mallard (Gråand) nest with eggs at the Mexican Garden

Soon after the nest was spotted a sign was placed at the entrance to the garden to inform people about the new residents, and to ensure that dogs are kept under control in the garden. The eggs will take ca. 28 days to hatch, and the ducklings will remain in the nest for ca. 10 hours to dry off and get used to their legs, before the mother leads them to the water to feed. Thankfully that’s not far away! They will remain with their mother for 50-60 days before fledging and becoming independent. We will be keeping a close eye on the nest (from a distance) to see what happens next!